Wow, that was a hard, fun, and humbling Saturday. Mistakes were made for sure. The rain (more so) and pending baby (less so) created a small window to get my hops in the ground. This post is a little late getting to the Interwebs. But still, I'm here to report that some plants are in the ground.

I picked up my rhizomes from Great Fermentations the second week of April. The goods included two bags each containing fifteen stems. There's a 10 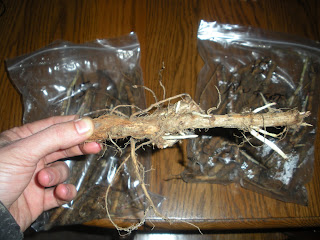 -20% failure rate, according to information provided by the brewing and wine making store here on the northeast side of Indy. Add to that my projected 30% failure rate as a third rate hack and I'll consider myself a success if any of them make it.


I deliberately chose this experiment because it takes me out of what I know. What I don't know is an agricultural sensibility, digging a crap load of holes, and being outside for 10 hours at a time. Had I much agricultural or even gardening sensibility, I would have picked up a load of top soil in advance of the planting. 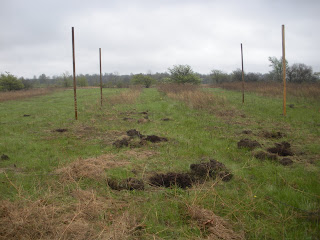 I would have also turned my soil last fall. Had I any experience digging holes, I would have opted for the more mechanized approach instead of saying, "hey, this shovel and I have got this." Had I a lot of experience being outside for 10 hours a day, I would've not bothered planting hops cause I would already be outside!

By the end of the night, after the truck was pulled out of the muddy rut I put in, I was hosing down mud on the vehicles and tools I had worked hard that day. Because I had been outdoors for the afternoon, I could smell the moisture and dusk settling in. That experience is usually only reserved for camping trips. I knew then that my day was a success, regardless of what ends up popping out of the ground.

The rain was also working against me. Between delivery and April 30th, Dunkirk received a healthy amount of precipitation. This wasn't really a shock, but it left the soil too wet to do much with. My references as well as Great Fermentations recommended I get them in ground by the end of April. So, I'm not sure what you're supposed to do when it rains, as it always does here in the spring, during this window. Couple this rain and the fact that I should I have turned my soil and let it set before planting (another mistake) and I'm left with a less than desirable growing environment for these little buggers. I'm banking on the handful of independent sources that essentially said you really have to make an effort to kill a hops plant. I don't know how I'll feel if I prove them wrong.

I have to take a moment and thank my family for the help. My dad is helping me while simultaneously trying to talk me out of this. Allison is the voice of reason, which is not uncommon. My cousin Connell stopped by in the afternoon and helped me get the fourteen rhizomes (10 Centennial and only 4 Nugget) I was able to get in the ground. 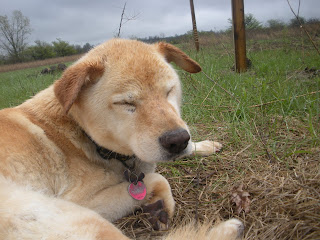 As an added bonus, I got to hang out and enjoy the day with this guy which is rare, given recent developments. Good times were had by all.

Email ThisBlogThis!Share to TwitterShare to FacebookShare to Pinterest
Labels: hops