Year to year, it seems we have a rotating cast of vegetables that flourish. That is, except our peppers. Even I can't kill a pepper plant. These things produce so many peppers that, after our fourth batch of salsa, we often compost the rest as we just can't use them all. I don't know why we end up planting such a variety of hot pepper plants. I suppose we have the room, they're inexpensive, and as mentioned above, they're pretty hearty. This year, I came across a recipe to make homemade hot sauce. I'm getting old and have a waning thirst for spicey food, but I'm in if it means less salsa in my life.

I picked a combination of cayenne, habanero, and jalapeno peppers from the garden. The recipe article I was using mentioned that greener peppers might dampen the hotness. These green peppers are fresh jalapenos, so I'm expecting a decent punch. 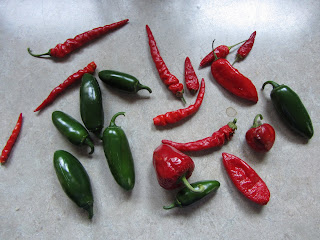 I cut the stems off of the peppers and left the seeds inside before putting them into the food processor. These peppers above produced a cup of processed mash. I poured the contents into a glass container, added a teaspoon and a half of salt. 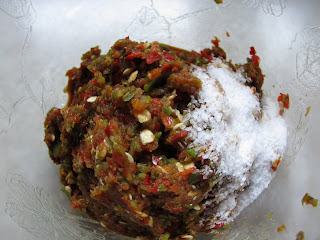 I mixed my ingredients and pressed them into the bottom of the container. The idea is that this would bring water to the top of the mixture. I need this stuff to ferment, so this layer of water acts as a seal to promote this fermentation. I did end up having to add some additional water to create this liquid layer. So now, I sit it and forget it for about a month. Stay tuned for part 2.

Email ThisBlogThis!Share to TwitterShare to FacebookShare to Pinterest
Labels: fermenting