A few Sunday mornings ago, we were woken to the last thing you want to hear when you are trying to raise chickens with dozens and dozens of people living in relative close proximity - a "cockledoodle doo." As it turns out, two of the four chickens we bought were roosters. It was an easy fix, though. We stuffed a rooster into a copy paper box and the other into a cat carrier and returned them from whence they came. Our Craigslist chicken guy offered a chicken for chicken trade, but we opted for just one. So, we're currently at three hens.

This bodes well for our chicken adventure. While the roosters were much more interesting to look at, we just had too many birds for our space. Now, we have three boring old hens. Smaller hens and fewer birds need surprisingly less feed, water, and waste. Plus, we're compliant with city ordinance and you all know we want to be law abiding citizens! 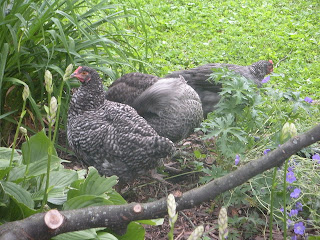 up change did destroy our pecking order. As you would guess, our two roosters were battling it out for the number one and two spots. Now, our two O.G. hens have settled in to the top slots. And they are shunning the new hen. We were worried at first. We didn't know if the hens would attack this new addition as they were pretty aggressive towards it. We thought they might starve it out. Luckily after a few days of hazing, they seem to have accepted junior.

No eggs yet. We ought to be seeing them in a month or so. Three chickens laying an egg a day (at their peak), means just under two dozens eggs a week. So, we'll have plenty for us and plenty to throw at cars from behind the bushes at night.
Posted by Unknown at 6:34 AM

Email ThisBlogThis!Share to TwitterShare to FacebookShare to Pinterest
Labels: Food