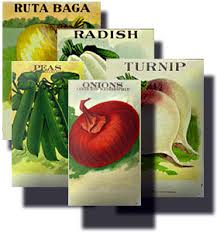 Borrow -> Grow -> Return -> Repeat, facilitated by your local public library.  That's the basic idea behind a public seed library.  I've been contemplating and reading about the concept of late and think that it has some merit that could bear further due diligence and research.


This is different than a seed bank or some other related endeavor by its intent.  A public seed library is not looking to fan the flames of societal breakdown by collecting seeds to survive some environmental or social meltdown.  That's a cultural move that focuses on solitude and a less than optimistic outlook on our future.  The public seed library is quite the opposite.  It's meant to promote community involvement and development.  It also is an opportunity for you and your family to get their hands a little dirty learning about the natural world and the food we eat.

From what I've read, this country has about a dozen or so seed libraries in public libraries.  NPR ran a story on the phenomena with a rather dramatic title, "How To Save A Public Library: Make It A Seed Bank." Yes, I'm sure public libraries do need help these days trying to stay relevant in the world of Kindles and the Internet, but I wouldn't get that hyperbolic with it.  In addition to promoting food and environmental awareness, I think the seed library is a novel and engaging avenue a library could venture down in order to promote foot traffic.  So yes, I do think it would help 'save' a library, so long as the cost and resources incurred did not outweigh the benefit.  But you can say that for just about anything.

The idea to put a seed library in an existing public library does make sense from the standpoint of lending items other than books. Given that most libraries I've been to lend more DVDs and CDs than books, it seems librarians might be open to the idea.  Though DVD and CD late fees probably make digital media more appealing than seed packets to a budget strapped library.  Because of this, a key to adoption would be to ensure this has little impact as possible to a library (e.g. volunteer or student groups to help manage the seed collection).

Of course, you could introduce initiatives into a library that would integrate a seed library with other library services.  There are child and adult gardening groups that could be developed.  You could package seeds with books (we call that cross selling in my sterile work world).  Possible spin off programs are numerous, depending on the availability and willingness of the librarians and/or the availability of volunteer staff.

A fundamental question arises.  Could something like this thrive in Indianapolis?  Planting a vegetable garden or experimenting in pots is not necessarily the first thing a lot of people think about when it comes to their free time. Given that the popularity of libraries has diminished over the years, I would imagine participation would be slow going. But this town has surprised me before, maybe it would with a public seed library.